I love breakfast.  I would be happy to eat it for every meal.  I am not talking about a big breakfast with eggs, toast, bacon, etc.  I am content with a bowl of cereal or a bagel.  French toast or chocolate chip pancakes will satisfy me as well.  But a breakfast that tastes like an oatmeal cookie?  Is that possible?  Sure is!

This week’s Sundays with Joy recipe is Oatmeal Cookie Pancakes.  This recipe can be found in the Joy the Baker cookbook and on her blog as well!  This is an extremely easy pancakes from scratch recipe.  No pancake mix necessary!  And you will most likely have all of the ingredients in your kitchen.  I did. 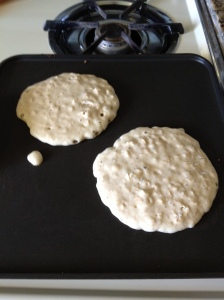 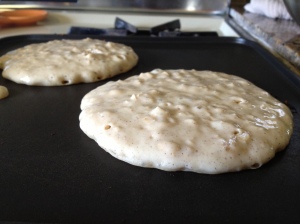 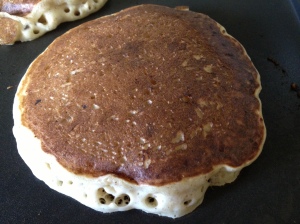 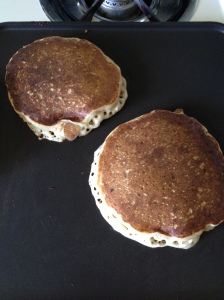 I was right.  My 2-year-old son, husband, and I had a wonderful breakfast the morning these were made. 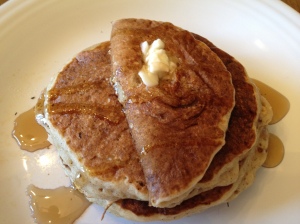 I wish my final product picture made them look more appetizing.  It doesn’t do it justice.  But trust me, if you want to have a special breakfast for whatever reason, Oatmeal Cookie Pancakes are the way to go!  Remember, you can find the recipe in the cookbook or on the Joy the Baker blog!

Lots to talk about today!  I seem to go through phases where I go days without making anything and then I do a bunch at once.  So I have a lot I want to share.

Let’s start with the great weekend I just had because it will eventually lead into something food related.  Saturday night Matt and I enjoyed a nice dinner out then saw the hilarious comedian Jim Gaffigan at the Hampton Beach Casino Ballroom.  We got to sit up in the Coca-Cola box, which is awesome!  The show was great and a night out with Matt with some good laughs was just what I needed.  Sunday I spent the day with my friend Leslie at the new Merrimack Premium Outlets.  Which of course, was also just what I needed.  If you haven’t gone, go check them out!  They are amazing.  I think one of my favorite stores, which makes these one of my favorite purchases from the outlets, is a Crocs store.  Check out these great shoes! 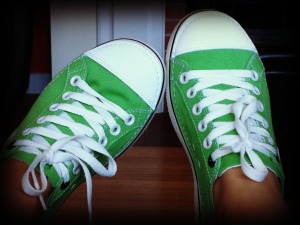 After the outlets, Leslie and I went to Trader Joe’s.  We were on a mission to find Speculoos Cookie Butter.  Mission accomplished.  However, while we were there, I got a few other things, all impulsively of course.  Nevermind the organic, healthy stuff.  I went for the cool baking stuff that you can’t find at a regular grocery store.

I got a couple of spices that I thought Matt would like.  I got some chia seeds because Dr. Oz and Daphnie Oz say they are good for you.  I’ll give them a try.  I got a sugar chocolate coffee bean grinder.  I am not sure what I am going to do with it but the jar looks cool and I am sure I will figure it out.  I got raw hazelnuts for a recipe I will share later.  Finally, I got cocoa almond spread along with the cookie butter.  The cookie butter is A-MAZ-ING!  My first thought is to make fudge with it.  We will see!

So I have been wanting to make my own Nutella for a long time.  I have come across a lot of different recipes on Pinterest and found one that looked really easy.  The recipe is from the blog Chocolate Covered Katie.  I have also made a deep dish chocolate chip cookie pie and blackbean brownies from her site.  Both very delicious!  In her recipes, she gives you options of different ingredients to use.  You can find the original recipe here, but here is the list of ingredients that I specifically used:

First, roast the hazelnuts until you can start to smell them and the skins start to crack.  Allow them to cool a bit and rub them together between two dish towels.  This gets the skin to come off.  Once that is done, put them in the food processor until it turns to a butter.  This takes a couple of minutes.  Next, add the remaining ingredients until smooth.  This also takes a few minutes.

Now, what seems to be a really easy recipe never turns out easy for me.  I thought, “Great.  Luke is sleeping.  I can whip this out in a 1/2 hour.”  An hour and a half later I was finishing it up.  Here’s why.  I don’t think I let the hazelnuts roast long enough.  The original recipe says to do it at 420 degrees for 10 minutes but I did it at 350.  I should have done it longer.  So it took FOREVER to get the skins off.  And boy is it messy!  I had skins all over the counter, all over the sink, all over the floor, and the hazelnuts kept rolling away from me. 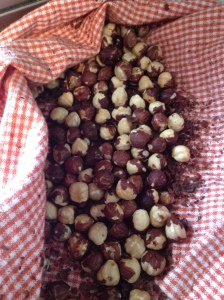 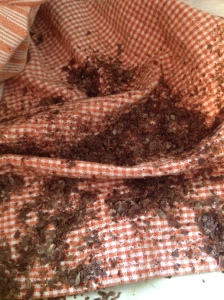 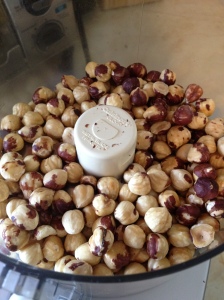 This took me a 1/2 hour alone.  But once I got that taken care of it was easy.  I thought.  I put all of the other ingredients in and it just wouldn’t smooth out.  I had it mixing for about 10 minutes.  It just kept going around and around in a big blob.  Then I realized I forgot the milk, of course.  Once I put that in it came out great. 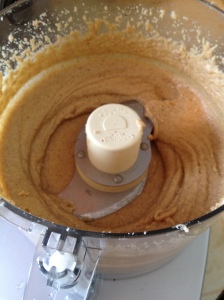 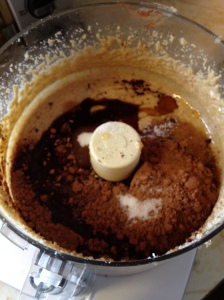 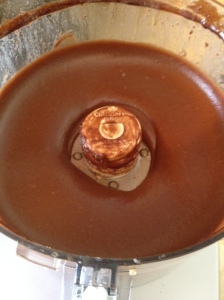 It came out so good!  Compared to Nutella, you can actually taste the hazelnuts.

Before I even made the hazelnut spread, I had to do my Sundays with Joy recipe, created by Joy the Baker.  It was Blueberry Orange Almond Pancakes with Orange Maple Glaze.  I made them first thing in the morning and Matt was able to have them before leaving for work.  I have said this before, I have an issue with figuring out how high to put on the heat on a stove.  Such as burning the butter I put on the pan because the heat was too high.  I also have an issue with flipping pancakes. 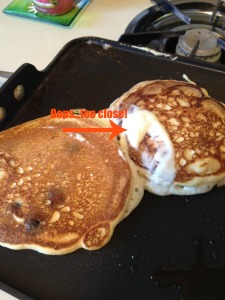 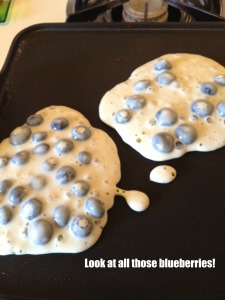 Although the ones I ate were just a tad gooey in the middle, Matt said they were awesome, numerous times, which makes me happy. 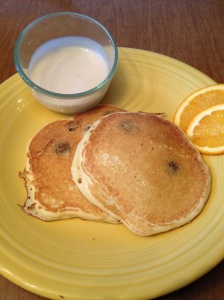 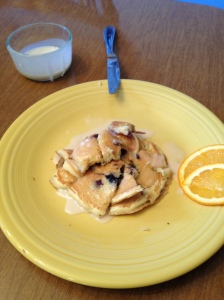 Now for dessert.  Yesterday was National Cheesecake Day.  I have been getting tons of emails from The Cheesecake Factory to go in for a 1/2 price slice of cheesecake.  If it was a Saturday or Sunday, Matt and I would have definitely been there.  Because we didn’t make it, I decided to make a cheesecake dessert instead.  Bakeaholic Mama posted a Biscoff Cheesecake Bar recipe that looked super easy.  The only thing I did different was use Golden Oreos entirely for the crust.  I can’t seem to find Biscoff cookies anywhere.  Boy I got lucky today.  Luke took good naps! 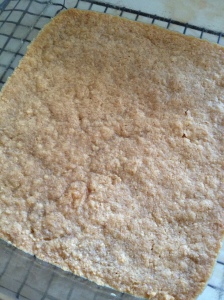 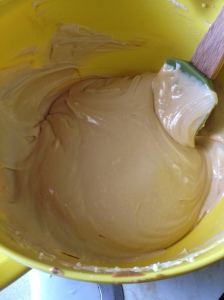 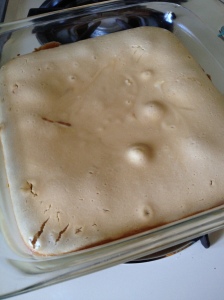 This came out so good.  I made some fresh whipped cream to finish it off. 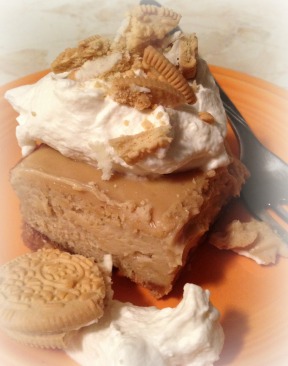 Real Food with Jessica
Domesticate ME!
Candid Appetite
Back for Seconds

Confessions, Chronicles & Challenges of a Marathoner

Will bake if left unattended

Notes from a Tuscan Olive Grove

Be Healthy, Be Happy, Be Local